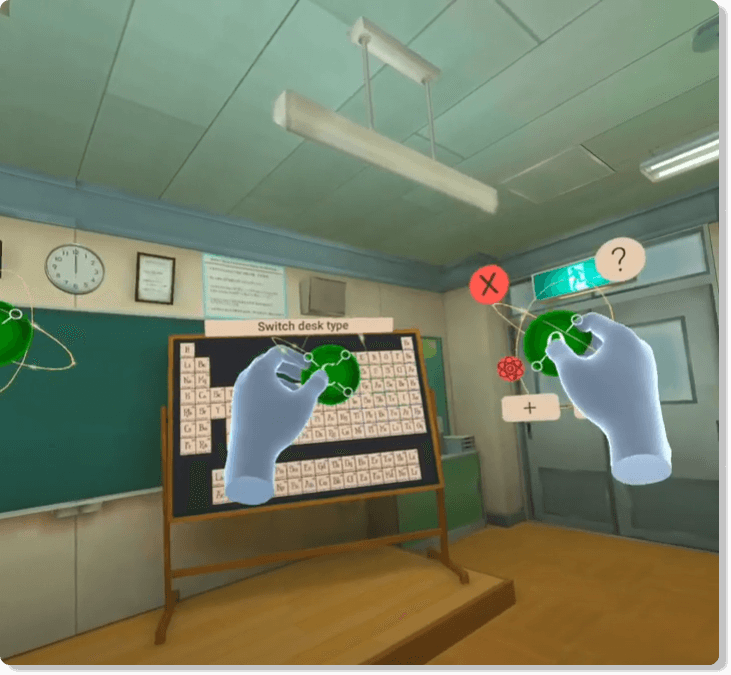 VRium is an engaging, interactive VR chemistry simulator that helps students get the most from chemistry theory and practice, developing the needed level of knowledge and honing the skills.

To do this, please fill out the following form.

To provide a real-life experience we have developed a study programme for the VRium using typical curricula of General and Inorganic Chemistry courses used in Ukrainian schools and universities. The first part in this programme is “Atomic Structure and Periodic Table”, which starts from the Topic 1 “Atomic Orbitals in Hydrogen Atom”.

For this topic we have prepared the following interactive visualizations.

The first model of atomic structure by Thompson postulated that electrons are located in positively charged medium. Famous experiments by Rutherford (1911) disproved this model. In new Rutherford’s model of atom, a light electron moves along a circular orbit around a heavy and small nucleus, which is just the proton in case of Hydrogen atom.

Here the model is presented simply as an animation of electron moving in a circle around proton. This model forms a common perception of atomic structure and thus has to be discussed in some more details.

Rutherford’s model was unsatisfactory. It correctly described experimental distributions of charge and mass in atoms. But Rutherford’s atom is unstable in classical electrodynamics, which predicts that an electron has to accelerate while moving on circular orbit, and if there is no external energy supply, it should lose energy by emission of electromagnetic radiation. Decreasing energy of an electron will decrease the radius of its orbit, and thus after some small time (estimated to be about 10-11s) the electron should fall onto the proton and Rutherford’s atom would annihilate.

This consideration is illustrated pictorially: an electron emits light and quickly falls onto the proton, moving on some orbit around it. This illustration gives a hint: given that in reality atoms are stable, either the electronic orbits in atoms are more complex, or somehow usual physics laws are not applicable for atoms.

Another problem with classical description of atoms is its complete inability to explain the stability of molecules. Atoms in molecules are held together by chemical bonds, where electrons are located between nuclei. But according to Earnshow’s theorem, the stable static equilibrium cannot exist in any system of point charges.

So when an electron is located exactly between 2 protons, attraction forces are compensated, and equilibrium is achieved. But it’s not stable: if an electron is shifted by arbitrarily small distance towards any nucleus, forces will become unbalanced, the electron will fall onto the nucleus and the system will annihilate.

Also classical picture could not describe atomic emission spectra. In that model, electron could have any energy, so photon with any wavelength could be emitted or absorbed. This contradicts experimental data – atomic spectra consist of discrete narrow lines.

In 1913 Niels Bohr fixed this problem in an ad-hoc manner by letting electron move only on some discrete set on circular orbits. Electron on each such stable orbit has definite energy, so moving between orbits is accompanied by absorption or emission of photon with specific wavelength. This simple picture reproduces lines of atomic spectra, but is self-contradictory and cannot be extended to molecules or even multi-electron atoms.

This development is depicted by electron moving on a second circular orbit around proton. After the electron emits a photon it moves to lower orbit. This model is valid for atoms and ions with a single electron: Hydrogen, He+, Li2+, Be3+, but theory cannot account for electron interactions – there’s no place for the second electron.

These problems were solved when in 1925 Schrodinger and other scientists developed modern quantum mechanics. Instead of classical electron that moves on some definite trajectory, it describes electron which can appear everywhere in space. Probability to find it and all physical values that can be measured are governed by a so-called wave function. This wave function is not arbitrary, it must satisfy the Schrodinger equation.

This is illustrated as electron that loses its orbit around the nucleus. In experiments when the position of electron is successively measured, results are not located on some line, but can appear everywhere in space. Still, the probability to find electron near the nucleus is much higher than to find it high away from it.

1.6. What is Electronic Cloud?

This interactive visualization shows 1s orbital of Hydrogen atom. Here the user observes measured positions of electron and can change the radius of the sphere around the nucleus. Increasing sphere size increases the chance to find electron inside it, but this chance never reaches 100%. This accustoms the user with the nature of atomic orbitals as some kind of distribution of probability to find electron.

This interactive visualization shows the inner structure of ns atomic orbitals. It turns out that for orbitals with higher main quantum number n, there are places where electron cannot be located. Number of such places increases as n-1, and these zones separate regions with different signs of wave function. User takes a short quiz after this visualization to memorize the connection between the structure of ns orbital and main quantum number n.

After introducing the concept of atomic orbitals (applicable to Hydrogen atom and atomic ions with single electrons), the next logical step is to describe multi-electron atoms. Thus the next topic will include concepts of electronic configurations, rules used to construct them, as well as their relevance to periodic table, chemical properties and chemical bonding.