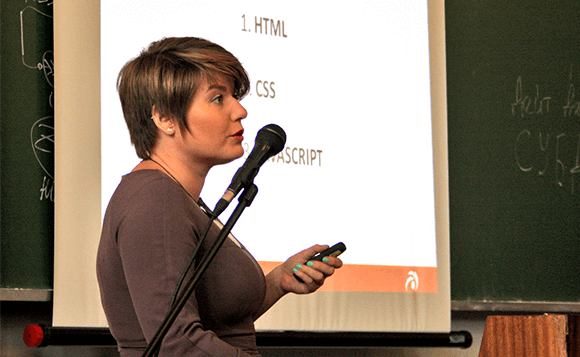 Qualium Systems now participates in all-Ukrainian project Brain Academy. It is a network of programming and QA courses. Our experts will give lectures on the Front End. Lectures will be held on the basis of Kharkiv National University of Radioelectronics (KNURE).

On the 15th of September Olga Krivchenko (CEO of Qualium Systems) gave a lecture at the opening of Brain Academy in Kharkiv. Is was devoted to the meaning of Front End, what are the prospects for developers who have chosen this field, which are trends in jobs and wages for Front-end developers in the world and in Ukraine.

Along with other speakers from the IT companies, Olga motivated the audience (students of KNURE and others who came to the event) to learn and gain knowledge in programming and QA testing.

IT-career is one of the most promising in Ukraine now. Recall that Kharkiv is one of the leading centers of outsourcing web and software development in Eastern Europe, a city with a huge human potential.